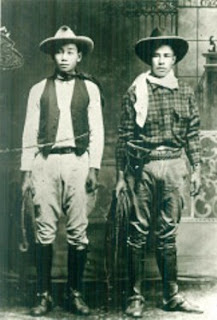 12/31/12: On a sunny day, high atop a hill in North Kohala on Hawaii island, Christie Cash and her husband, Jay Nelson, surveyed a lot they were thinking of buying. They wound up being more taken with the 33-acre parcel next to it, which was once part of a large spread known as Pua­kea Ranch.

"Even at a distance it was stunning," Cash said. "We asked our Realtor to find the owner and see if we could get permission to walk through it. We did the next day, and the moment I set foot on it, I knew it was a special place. Even though it wasn't for sale, we decided to make an offer for it."

That was in 2006, and the couple closed the deal the following year. There were four run-down cottages on the property, and Cash delved into research and renovations with equal enthusiasm.

In 1848, she learned, King Kamehameha III enacted the Great Mahele, which divided Hawaii's land among the alii (royalty), chiefs and commoners. The thousands of acres that became Pua­kea Ranch were held as crown lands by Kamehameha I's granddaughter Kekauonohi until 1870, when Dr. James Wight acquired them.

Wight served the North Kohala community as a medical doctor, postmaster, circuit judge and representative in the territorial government. He also started raising cattle and growing and processing cane at Pua­kea Ranch. Among the workers on his sugar plantation were Zenjiro and Wasa Kawa­moto, who had immigrated to Hawaii from Hiro­shima.

The sugar enterprise at Pua­kea Ranch lasted until 1933. Ranching thrived for another 50-plus years, due in large part to the Kawa­moto family. In 1934 Parker Ranch (then and still Hawaii's largest ranch) started leasing Pua­kea from the Wight Estate and hired Masato "Johnny" Kawa­moto, Zenjiro and Wasa's son, as the foreman.

Parker Ranch purchased Pua­kea Ranch 12 years later. Members of the Kawa­moto family remained as overseers until the late 1980s, when ranching activities stopped and the cottages were rented out.

Today Puakea Ranch is on the state Register of Historic Places, its rustic setting and beautifully restored cottages creating a memorable vacation getaway that honors the Kawa­motos. "The cottages' footprints are the same," Cash said. "We painted the walls, sanded the floors, replaced the roofs and added gutters but kept as much of the original elements as we could."

All the cottages have lanais, tree swings, fully equipped kitchens and expansive garden, pasture and ocean views (breaching whales are a common sight this time of the year).
James Cottage — a bright, airy studio — dates back to the 1920s. On a clear day, waterfalls in East Maui can be seen from its lanai.
Built in the 1930s, Miles Away offers a dipping pool with a waterfall, a wooden bathtub handmade in the traditional Japa­nese "furo" style and an oversize hammock lashed to two coconut palms.
Zenjiro's and Johnny's families were among those who lived in the century-old Cowboy House (all three of Johnny's children — Yoshi, Masa and Thelma — were born there). It was also a bunkhouse for Pua­kea Ranch's pani­olo (cowboys).

Yoshi was the last foreman. A few years ago Cash invited Margaret, his widow, to visit the ranch. Generous with her time and memories, Margaret allowed Cash to scan, enlarge and reprint several old family photos to display in the Cowboy House.

Although they had other careers, Yoshi and Margaret's two sons, Alvin and Bobby, helped at the ranch whenever they could. A saddle made by Alvin rests beneath a picture of Yoshi. "There's also a portrait of Zenjiro and Johnny, so all four generations of Kawa­moto men who lived and worked at Pua­kea Ranch are represented in the house," Cash said.

In the 1940s Yoshi constructed a house for his family on two acres of ranch land, at the end of a long driveway bordered by Java plum trees. He had a green thumb, and lovingly tended orchids in an adjacent greenhouse.

Guests staying at Yoshi's House have access to a private lava-rock swimming pool and expansive lawns with dozens of fruit and flower trees. A delightful surprise is the detached bathhouse. Originally the washhouse, it features slate flooring, a rain shower with ocean views and a shiny copper tub big enough for two.

A stay at Puakea Ranch begins with greeting the resident horses — Blue, Abbey and Brandy, who will likely be grazing near the front gate. Chickens and turkeys roam freely around the property, and cows dot emerald pastures.

Abundant salad fixings flourish in the organic garden. "Many of our guests come from urban areas, so the garden is a wonderful part of our ranch experience," Cash said. "They can pick whatever herbs and vegetables they'd like, and they're also welcome to the eggs laid by our chickens, and the bananas, coconuts, papayas and mangoes on our trees."

The Toy Box is a playroom full of games, books, puzzles and toys that children can borrow. Beach chairs, sand toys and insulated backpacks for picnics are also available upon request.
For many people the draw of Pua­kea Ranch is its natural beauty and peaceful, unpretentious ambience. "With that comes the feeling that you're truly away from it all," Cash said. "You hear birds chirping, chickens clucking and cattle lowing. Our guests tell us they're comfortable and relaxed here. They say they really feel at home, which is the best compliment we could ever receive."