Makahiki, a season for rejuvenation 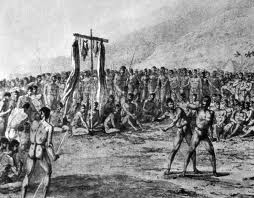 Today many view makahiki as a time for games and sport such as ‘ulu maika, mokomoko and könane – whose western counterparts are bowling, boxing and checkers, respectively. But once, long ago, this season signified much more than what is celebrated today.

“(Makahiki) was a reawakening of a time period in the year marked for rejuvenation,” says Umi Kai, a lua master, or ‘ölohe lua, with Pä Ku‘i A Lua, a nonprofit organization devoted to the perpetuation of the Hawaiian culture through the Hawaiian martial art of lua. Traditionally makahihi was a time of peace and revelry, when war and major projects would cease and elite competitors participated in sport.

Kai and fellow ‘ölohe lua Kamilo Lara and Kaha Toledo hosted a lecture on makahiki at Bishop Museum in September as part of the museum’s ongoing Traditions of the Pacific program, with hopes to share with other modern-day Hawaiians the ancient protocols associated with this sacred time of year. “Within Hawaiian culture, (makahiki) is a tribute to Lono, the god of the rain and fertility, asking for help with next year’s crops and for healing,” Kai said at the lecture. “For the ali‘i, it also was a time for recognizing their resources – to recognize how many physical resources they had available” as well as how many top warriors, weapon makers and canoe builders they had.

Makahiki would begin in October or November and last about four months. Ancient Hawaiians followed a lunar calendar, not the Gregorian calendar we follow today, and so their months and ours do not perfectly match up. However, Kai explains makahiki officially starts with the first new moon after makali‘i, the constellation Pleiades, appears in the Eastern sky at sunset. “And because you see things in the sky at different times depending where you are standing on Earth, the beginning of makahiki varied from island to island as well,” Kai noted.

When makahiki did arrive, Hawaiians would welcome Lono through protocol that began early in the morning, with kapu placed on haumana (students) partaking in the rituals – käne would partake in the ‘awa ceremony and blessing of the spiritual images, while wähine would gather ritual foods. Those who would be in attendance at the protocol ceremony also were cleansed by pï kai, or sprinkling of water. “The idea was to come to this protocol ceremony with pure intentions,” Kai explained.

A ceremonial procession then traveled clockwise around the island led by the pü kani (trumpet blower). The procession is flanked by two kähili kï (kähili made of the kï plant) – one in the front and one in the back – and followed, in order, by kahuna, ali‘i and the akua loa, also called akua Lono, flanked by two älia. The älia are poles that mark areas of kapu. “As akua loa traveled, anything makai was kapu, so you wanted to make sure you were mauka, or else you would face a penalty,” Kai said.

The akua loa is a long notched pole, from 10 feet to 16 feet long, with a representation of Lono carved at the top. A crossbeam was draped with white kapa and dressed across the top with lei made from the hearty pala fern, or any other edible fern. Also hanging from the kea, the crossbar, are lei hulu and two ka‘upu, or large seabirds, on each side. Some believe seabirds helped guide Lono during his journeys from Kahiki.

After the akua loa came the akua pä‘ani, in the form of a spear, or ihe, whose tip is covered with ‘ie‘ie basketry and two kapa streamers, one yellow and one white. Akua pä‘ani is the god of games. Others in the procession followed, and a second set of kähili kï designated the end of the procession.

Also important to the protocol was the akua poko, a small image that served as each ahupua‘a’s akua that would greet the akua loa upon its entry into the district at an altar, or ahu, where ho‘okupu was presented. “Once a pule was called and the kapu was lifted, then the games could begin,” Kai said, concluding the lecture.

Procession of akua loa/lono is at 8 a.m., with games commencing at 9 a.m. for men and boys 16 and older, and a dinner/awards ceremony at 6 p.m.

Sarah Pacheco, an O‘ahu- based freelance writer, is a former assistant regional editor for Midweek.